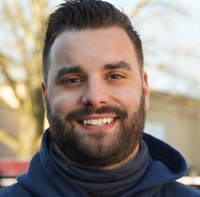 Kevin grew up in Fayetteville, GA, and attended Gordon State College before transferring to the University of Georgia Griffin Campus to complete his last two years of college.  Thanks to the efforts of his Terry College of Business academic advisor at UGA - Griffin, Dr. Sonya Okoli, Kevin spent three summers interning at a BAE Systems, a multinational arms, security, and aerospace company. Now living in Canton, GA, and married to his high school sweetheart, Mackenzie, Kevin is employed as a Senior Sales Consultant with Infinity, a company in Roswell, GA, that specializes in exterior home renovations in the greater Atlanta area. In 2020, Kevin finished as the #1 sales rep at Infinity, selling over $2.2M dollars’ worth of products; he also finished #7 in the nation out of 3,341 reps nationwide.  Because it is crucial to learn the psychology of consumers and to understand how people think and how they make financial decisions, Kevin attributes much of his sales success to the psychology and consumer economic classes he took at UGA.  Kevin is so proud of his UGA roots that he and his wife rescued an English Bulldog and named him Herschel, in honor of UGA football great Herschel Walker.