Your lawn could help save the bees 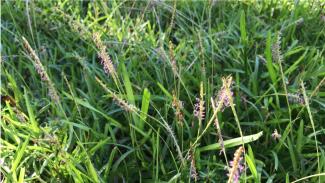 Over the past few decades, pollinators have been in decline worldwide, which is concerning because 70% of crops used for human food depend on pollinators. Turfgrasses – used for most residential lawns – often take some of the blame for pollinator decline as they are known to be wind-pollinated and were thought not to serve as a pollinator food source, until now.

University of Georgia and U.S. Department of Agriculture researchers identified bees that were collecting pollen from the flowers of a turfgrass called centipedegrass. The researchers have been looking for ways to reverse the decline of pollinator populations by examining centipedegrass as a food source for pollinators, with hopes of normalizing low-maintenance, bee-friendly lawns. Their findings have been published in the Journal of Entomological Science and Insects.

The study was led by College of Agricultural and Environmental Sciences faculty Shimat Joseph and David Jespersen on the UGA Griffin campus alongside USDA researcher Karen Harris-Shultz in Tifton.

The long-term goal of the study is to promote bee-friendly grasses. Some types of turfgrasses require large amounts of water and fertilizer, and homeowners often use insecticides and herbicides to control insects and weeds, but centipedegrass is low maintenance by comparison. It is used for lawns, parks and golf course roughs and is well-adapted to the sandy, acidic soils of the southeastern U.S. Now, researchers like Joseph and his team are realizing centipedegrass is useful for much more.

“The knowledge that centipedegrass lawns can be beneficial to pollinators is a complete change in thought about turfgrasses,” Harris-Shultz said. “There is an environmental benefit to growing centipedegrass as it does require minimal care. Additionally, by providing a food source to bees, these bees may pollinate other economically important crop plants.”