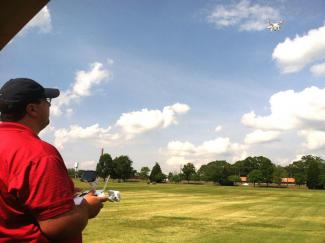 University of Georgia research technician Clay Bennett “pilots” an aerial drone over turfgrass research plots on the UGA campus in Griffin, Georgia. UGA Extension turfgrass specialist Clint Waltz uses the drone to reduce the amount of time he and Bennett spend documenting data in fields. They also use the drone to gather supplemental data through bird's-eye-view photographs of research plots.

Georgia House Resolution 744 created a committee to study the use of unmanned aerial vehicles, or drones, in the state. Created as a result of public concern, the committee will look at the uses of these remote-controlled, airplane-like devices, equipped with cameras and used by law enforcement agencies and other government authorities, to determine whether they invade privacy.

University of Georgia scientist Clint Waltz in Griffin, Georgia, has been using an aerial drone to reduce the amount of time he and his technician spend documenting data in fields. They also use the drone to gather supplemental data through bird’s-eye-view photographs of research plots.

Waltz is uncovering how his research benefits from the use of his drone, or what looks like a miniature helicopter with a camera mounted underneath it.

“Photo documentation is essential to our research, and the drone can take aerial photos of the effects of different fertilizer and pesticide treatments on various grasses,” said Waltz, UGA Extension’s turfgrass specialist. “It can go up 50 or 60 feet and take a photo, which helps us measure treatment effects.”

The drone Waltz uses on the UGA College of Agricultural and Environmental Sciences campus in Griffin is lightweight, weighing under 5 pounds.

“It’s very small, like 2 feet by 2 feet, but it can fly 700 feet away from you. You have to keep it in your line of sight at all times,” explains Clay Bennett, Waltz’s research technician and the drone’s on-the-ground “pilot.”

Bennett says he has heard of companies wanting to use drones for commercial applications. “They want to use them as part of their business model. We want to use it for research – not to make money,” he said.

At UGA, research data is recorded from individual research plots by human technicians who look for differences with the human eye. “Now, I can add one, large image of five treatments replicated on 20 plots. That one image with the sun in the same location can improve our accuracy and recommendations,” Waltz said.

Waltz says that, in theory, a drone could fly over a field of row crops in less than an hour and return to the farmer with a photograph that would help him target pesticide applications.

“This is precision agriculture. The technology already exists in precision ag to use infrared cameras to take photos over fields. These images indicate stressed areas. It takes a photo of hot and cold spots in the field and certain areas show up red, orange, blue or green. It’s not a very pretty picture, but it’s very helpful to farmers,” he said. “An image from our drone is a very high quality image.”

Infrared photos can also indicate dry spots in fields. A drone camera photograph could be used to identify areas on a golf course that need irrigation, Waltz said.

“A (golf course) superintendent comes to work, sends out the drone to take photos of all of the greens, identifies the dry spots and sends his staff out to apply irrigation just in those areas,” he said. “In the afternoon, he could send it out to take photos of all 18 greens and see the effect of the irrigation. This would also save a lot of labor for his staff.”

Golf course superintendents can also use drones to inspect the condition of their courses. “Maybe there’s frost, and you need to delay opening until 10 a.m.,” he said. “You could report that over social media.”

“Picking up weed (presence) is difficult because you’re looking at green on green. Disease issues, on the other hand, would be brown and could be identified early,” he said. “A grower wouldn’t have to apply blanket sprays. He could identify the problem area, mark it and spray just that area with a low label rate. The amount of pesticide applied would be reduced, and thus, the cost goes down.”

“The grower could then pull out grasses that are contaminants or are not the same variety that he’s growing. A drone could fly over a 500-acre sod farm in an hour or two and bring back a photo the grower could use to pinpoint and pull out the impurities,” Waltz said.

It takes Bennett 15 minutes to fly the drone over UGA turfgrass plots once a week to take photos. The UGA Griffin turfgrass program purchased its first drone last year for $300.

“That first one had some issues. The one we have now cost $1,200 and we’ve just had to replace one blade,” he said. “The $300 was basically a toy, and the $1,200 model is much more precise. Now I can turn the camera different angles and even take video. The first one wouldn’t hold still and take good images. The stability of the second one has made all the difference.”

Images from the drone camera are downloaded directly onto a smartphone.

Waltz says aerial technology has come a long way since his college days. “In the late ‘70s and early ‘80s, one of my professors was using satellite images and pictures taken from airplanes for similar purposes. That methodology is still cost-prohibitive for turfgrass research. Now, with an inexpensive drone and minimal training, it’s something an individual can do without NASA or hiring a private pilot,” he said.

The drone Waltz uses is the same model that crashed on the White House lawn. “We don’t plan to use it that way, obviously,” he said. “Like many things, drones can be misused. But when they are used responsibly, they have the ability to significantly help agricultural research.”

For more information on UGA turfgrass research, go to www.GeorgiaTurf.com.