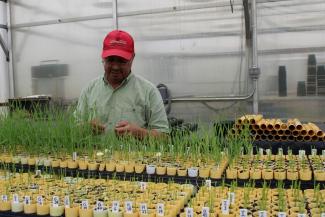 Mohamed Mergoum, the Georgia Seed Development-UGA Foundation Professor in Wheat Breeding and Genetics at the Institute of Plant Breeding, Genetics and Genomics, examines wheat seedlings in the greenhouse at the UGA Griffin campus.

Three new wheat varieties released this year by the University of Georgia College of Agricultural and Environmental Sciences’ wheat breeding program are the product of more than a dozen years of work by breeders on the UGA Griffin campus.

When it comes to cultivating new varieties of wheat, patience is key, as it takes an average of 10 to 14 years to breed a new variety of the grain that has been around as long as mankind. Researchers put in many years of work to see the fruits of their labor, and this year Mohamed Mergoum, the Georgia Seed Development-UGA Foundation Professor in Wheat Breeding and Genetics at the Institute of Plant Breeding, Genetics and Genomics, and his research team are seeing the results of work begun in 2005 by wheat breeder and Professor Emeritus Jerry Johnson.

The three varieties being released this year — known as '17E8', '17E11' and '17LE16' — are all soft, red winter wheat and will be used to make flour for crackers and cookies. To determine what each wheat variety is best used for, researchers test the flour by making baked goods such as cookies or bread during the breeding process. This also allows for the product to be better marketed to both the farmers who grow the wheat and the milling and baking companies that purchase it.

All three new varieties released this year have been licensed —  '17E8' to Harvey’s Fertilizer and Gas via JoMar, '17E11' to Ag. South Genetics, and '17LE16' to Progeny (Erwin-Keith) companies. These companies  will commercialize the wheat varieties and pay royalties to UGA for each bushel sold. Once these new cultivars of wheat reach the consumer, they will have a lifespan of roughly three to five years. After that period, new disease resistance is often required or farmers seek new varieties to grow.

While all three new UGA wheat cultivars are high yielding and well adapted to Georgia and the Southeast, each cultivar has unique traits:

Johnson made the first crosses that led to the new varieties in 2005 and 2006, when he was head of the wheat breeding program at UGA-Griffin. Johnson was instrumental in recruiting Mergoum to the Griffin campus in 2015, and Mergoum now leads the program. Although he is retired, Johnson’s work continues through the research that continues at UGA-Griffin and through these new varieties.

“Breeding wheat is long-term and continuous work,” said Mergoum. “No one knows what the future holds and there are a lot of predictions made to imagine what challenges there may be in the future and what consumers’ preferences for wheat products are.”

When breeding a new variety, three different criteria form the wheat classes: hardness/softness of the kernel color (red or white) and growth habit (winter or spring). Each class has different traits and properties. For example, hard red spring wheat is good for making products that require a strong, high-gluten dough, such as pizza crust, but would not be good for cookies, which are typically made with soft red winter wheat flour, Mergoum explains. Because different varieties are suited to different growing regions and climates, the type of wheat grown in the central and northern states will be different from the type that is grown in Georgia in particular and the Southeast in general.

Creating varieties versatile enough to grow in several different regions is a benefit to breeders because farmers in more areas can grow them on a large scale.

“Many of our varieties are grown all over the Southeast, which is good for us because farmers often replace acres deemed for wheat with other crops such as corn and soybeans, which are grown in the same season,” Mergoum said. Among the wheat breeding programs at institutions in more traditional wheat-growing regions of the U.S., the UGA program is historically regarded as a well-established and successful program in the U.S. and the region, having released 10 new varieties since.

One of the critical factors that goes into wheat breeding is disease and pest resistance in the plants. Plants are susceptible to diseases and pests including rusts, blights, viruses and insects such as the Hessian fly. Researchers spend years trying to make varieties more disease resistant, but often new diseases or pests will emerge that necessitate continuous research and work on new varieties.

“It is a constant battle against the changes of the disease. You constantly have to look for new genes,” said Mergoum. “Stacking ‘good’ genes is one of the most important jobs for a breeder. The more you stack in one variety, the more you increase its adaptation, including disease and pest resistance.”

There are many collaborators at UGA, U.S. Department of Agriculture Agricultural Research Service (USDA-ARS) and the regional breeding programs in the Southeast region that contributed directly or indirectly to the development of these cultivars, Mergoum said.

SunGrains breeders work together to maximize funding and research opportunities by sharing resources and royalties. “In addition, there is a free exchange of germplasm among the SunGrains group, therefore, any released variety from each of these programs is an effort of all the breeding programs of the group,” said Mergoum. “Hence, royalties generated by all releases of the SunGrains group are also shared. All UGA releases have been tested prior to their release by SunGrains group and provide data that helps us to determine the geographical areas of adaptation of our varieties. The program is very important to our work to release new small grains cultivars.”

To learn more about about UGA's Griffin campus, visit griffin.uga.edu. For information about the Institute of Plant Breeding, Genetics and Genomics, see plantbreeding.caes.uga.edu.