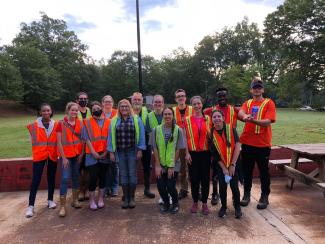 Pictured are some of the students, faculty and staff of UGA Griffin who took part in the City of Griffin’s Annual Stream Cleanup on October 16.

The team had 18 volunteers from campus, primarily made up of students in the Food Science Club and the Center for Food Safety, who spent the morning working near the old Rushton Mill in a stream that feeds into Shoal Creek. They filled several bags with trash such as plastic bottles, chip bags, articles of clothing and old toys. Most items were typical of what you would expect to find in this type of cleanup, but the group did find a few things they were not expecting.

“We found more than one vacuum cleaner,” said one student volunteer. “It was just odd as you would not think of someone throwing that in the stream, but we were told this area often floods, so it may have been outside someone’s house and brought down because of the rain.”

Being involved in this event could put things into perspective for many people as they may not realize how throwing one bottle or wrapper on the ground adds up rather quickly.

“It was really an eye-opening experience and hopefully we made a difference,” said Slaughter. “You could feel people watching us as they drove by, so maybe we inspired some of them to do the same type of thing.”

One person who was inspired to do more was Peter Chiarelli, a first-year PhD student in the department of Food Science. While he has volunteered for many groups throughout his college career, this was the first time he had done a cleanup event. Chiarelli enjoyed it so much that afterwards he felt led to organize an Adopt-A-Stream project for the Griffin campus.

“I really want to do an Adopt-a-Stream for Shoal Creek, which runs into the UGA Griffin property,” he said. “It not only gives you a way to meet people, but also to give back to the community.”

Chiarelli has already gotten the ball rolling and is in the process of setting up the program. He aims to have it open to the entire Griffin campus community in hopes that many people will get involved.

“It just opens you up to a life outside of campus. Hopefully we will be able to get this going and give back in a big way,” said Chiarelli.