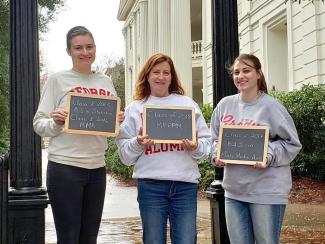 Becky Griffin recently completed her master's degree from the University of Georgia College of Agricultural and Environmental Sciences, a goal she has had for the past 30 years. Her daughters Allison (left) and Mady (right) are also UGA graduates. They are shown with Griffin (center) by The Arch on the UGA campus. Traditional dictates that students should not walk through The Arch until they have graduated.