Written by
Christopher James
Posted on
Thursday, May 26, 2016 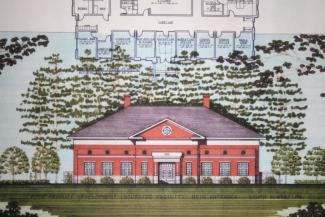 Rendering of the FoodPIC building being built on the UGA campus in Griffin. Image credit: UGA FoodPIC

Tucked into a corner of the University of Georgia’s campus in Griffin, Georgia, FoodPIC is an innovative research center that could be a key component in bringing business and industry to the state. UGA’s Food Product Innovation and Commercialization Center (FoodPIC) is already a valuable asset to Sean McMillan, UGA’s Atlanta-based economic development director, when he meets with companies interested in moving to Georgia. There are only 13 similar facilities in the U.S., the closest in North Carolina and Tennessee.

“If we’re competing with a state that doesn’t have something like this, we have an advantage,” said McMillan. “It’s an asset and we’re communicating that to companies that are looking to expand their existing operations or establish a presence here.”

FoodPIC, which will soon occupy a new 14,500-square-foot facility in Griffin, assists companies in developing new food products efficiently and economically. Faculty in the UGA Department of Food Science and Technology, part of the College of Agricultural and Environmental Sciences, initiated the center.

Among the products in development are nut milks, hot sauces and meat rubs. Faculty members are also exploring blueberry wine and carbonated yogurt, and studying the shelf life of these and other novel food products.

“I think of Griffin as being the next Silicon Valley, but with a food emphasis,” said FoodPIC Director Kirk Kealey. “We want to develop and drive breakthrough innovations. It’s a massive vision.”

FoodPIC opened in 2007 in the Melton Building on UGA’s Griffin Campus. In each of its first seven years, faculty members there received about 13 requests for help from outside companies. Last year, the FoodPIC fielded 68 requests that resulted in 24 proposals and 10 completed projects. The program also reached nearly 1,600 people through outreach at trade shows and other events. Kealey’s next goal is to acquire 120 requests that lead to 15 completed projects in 2016.

McMillan says that FoodPIC gets a lot of attention from the companies he meets with regularly.

“In the area of small business and encouraging entrepreneurs in the food industry, it’s definitely a great service,” McMillan said. “It could be something that could sway a relocation or expansion decision to Georgia.”

For more information, see the program’s website at caes.uga.edu/center/foodpic/.