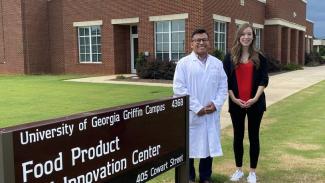 The Food Product Innovation and Commercialization Center, known as FoodPIC, at the University of Georgia campus in Griffin is a one-stop shop for food businesses looking to launch a product. Scientists here also look for ways to turn raw foods from Georgia into value-added products. Pictured are Kevin Mis Solval, assistant professor in the Food Science and Technology Department, and FoodPIC program manager Lauren Hatcher. (Photo: Ligaya Figueras/AJC)

As farmers across the state swelter in the summer heat tending crops and livestock, food scientists inside a state-of-the-art 14,500-square-foot facility on the University of Georgia campus in Griffin are laboring over a different side of the agricultural equation: How can we get the biggest bang for the buck from Georgia’s food commodities?

UGA’s Food Product Innovation and Commercialization Center is a one-stop shop for food businesses looking to launch a product. FoodPIC, as it’s known, provides support for product feasibility, development, packaging, food safety, consumer acceptance (for example, crickets, even in powdered form, are a tricky food sell) and marketing. The center, part of the College of Agricultural and Environmental Sciences, primarily works with Georgia companies and commodities, although it also conducts research and development for entities in other states as well as overseas.

A glance inside a display case near the entrance bears evidence of FoodPIC’s involvement in bringing locally made products to the marketplace: a tub of Proper Pepper pimento cheese, a jar of Classic City Bee Company smoked honey, a bottle of Pecan Ridge Plantation pecan truffle oil, a package of Charleston & Church cheddar rounds.

Besides operating as a fee-for-service business accelerator, scientists here look for ways to turn raw foods from Georgia into value-added products, as they told the AJC. Their “what-if” projects are some of the most exciting work coming from this facility, which debuted in 2017. Yet, the sell hasn’t always been easy.

“It’s hard to move folks in the agricultural sector to look at the value of things beyond their fruit and vegetables,” said Kirk Kealey, the center’s director from 2015 until his retirement in March. “Let’s look at sauce, wine, juice. There’s where we have a huge opportunity.” (Prior to his tenure in academia, Kealey held positions with General Mills, M&M Mars Inc. and PepsiCo Inc., which provided insight into the world of shelf-stable foods, confections and beverages.)

Take, for example, Georgia’s emerging citrus market and a crop like the satsuma. Is it good for something besides peeling and eating? What about turning the fresh fruit into a powdered drink?

Three massive temperature-controlled rooms, known as pilot plants, are where questions like these are put to the test and recipes get perfected. Kevin Mis Solval, assistant professor in UGA’s Food Science and Technology Department, and FoodPIC program manager Lauren Hatcher led me inside one room where researcher Bobby Goss and graduate student Boran Wang were using milk to test the new atomizer of a spray dryer, machinery used in the food, chemical and pharmaceutical industries to convert liquids into powders.

Plenty of Georgia fruit juice has seen time in a FoodPIC spray dryer — from satsumas to peaches to muscadines to pomegranates, said Mis Solval.

Besides a drink powder, the center is working with the Georgia Pomegranate Growers Association, based in Alma, to study the potential for other novel pomegranate products, such as pectin and fruit juice powders with antioxidant properties.

Anyone who has visited the Georgia coast during winter months has likely seen a jellyfish bloom.

Cannonball jellyfish, also known as Georgia jellyball, is edible, but most Americans don’t have a taste for it; about 90% of the harvest is salted and dried before being exported to Asia, where it is deemed a delicacy.

Mis Solval calls it a “missed opportunity” for the domestic market. He and his colleagues hope to change that.

Thanks to a nearly half-million-dollar grant from the U.S. Department of Agriculture, faculty at FoodPIC are working to develop jellyfish products, such as in the form of nutritional supplements, that take advantage of the marine animal’s high collagen content, a protein normally extracted from bovine sources.

Beyond contributing to the economic prosperity of the state, FoodPIC scientists are part of medical efforts to improve the health of Georgia residents. Hatcher and Mis Solval opened the stainless-steel door to another pilot plant, where lab technician Alison Payton was baking cookies.

They weren’t just any old cookies, but the finalized recipe for high-protein treats destined for a Morehouse College of Medicine study that seeks to combat the effects of sickle cell anemia among pediatric patients at Children’s Healthcare of Atlanta.

“There’s a lot of expertise on this campus,” said Hatcher as she and Mis Solval escorted me to the front door.

From food-as-medicine efforts to powdered fruit juice to collagen extractions — who knew there was so much innovation happening inside this nondescript brick building in Griffin?