UGA faculty elected Fellows of the National Academy of Inventors 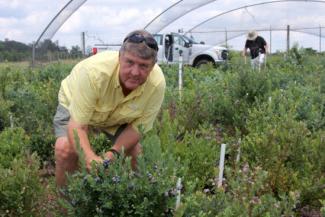 “Scott NeSmith, Ed Law and Anumantha Kanthasamy represent the breadth in application that exists across the UGA research enterprise,” Burg said. “Dr. Kanthasamy’s research has tremendous potential to bring new treatments and hope to those suffering from Parkinson’s disease; Dr. NeSmith’s work in developing new blueberry varieties helped establish Georgia as one of the leading U.S. states in blueberry production; and Dr. Law’s development of electrostatic spraying technologies boosted Georgia agriculture before being applied in other economic sectors — including to disinfect surfaces during the Covid-19 pandemic. Congratulations to Anumantha, Scott and Ed on this well-deserved recognition of their efforts in research and invention.”