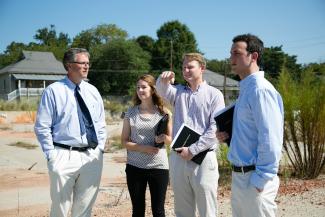 From left: UGA's Jason Christian, Mariana Ozier, Mitchell Massengill and Alec Trexler are assisting with a project on a possible mixed-use development and aquatics center in Griffin. The students' job will be to help determine the infrastructure needs for the development and their estimated costs.

University of Georgia senior Mariana Ozier looked like a professional engineer, scribbling notes as she walked a site pegged for redevelopment in Griffin.

She and Spalding County Community Development Director Chad Jacobs discussed zoning, building plans and possible locations for a storm water detention pond. It was exciting, Ozier said, to be part of a group that was working on a real project, not just something from a textbook.

"Just getting to see how we can help make it happen and how our work is going to impact what they want to do is pretty cool," she said. "I do feel like a professional engineer."

Ozier, along with UGA College of Engineering classmates Mitchell Massengill and Alec Trexler, were in Griffin as part of their capstone senior design course.

They are assisting with a project on a possible mixed-use development and aquatics center. The students' job will be to help determine the infrastructure needs for the development and their estimated costs.

Engineering expertise is one of many university resources that the UGA Archway Partnership offers to communities across the state.

Archway's collaborations with the College of Engineering have led to many opportunities for undergraduate and graduate students to get hands-on experience before they join the workforce.

"It's engaging not just a couple students, but an entire class of students," said Angel Jackson, an Archway operations coordinator. "At the end of the day, the community benefits because they get phenomenal project deliverables, but the students also benefit from working on real-world projects, outside the classroom and with actual clients, so it's a great win-win process."

The projects build on theoretical classroom work. Jason Christian, an assistant professor who co-teaches the class with Assistant Dean Stephan Durham, said real-life complexity forces students to use problem-solving skills they don't develop in the same way when all the numbers work out on an exam.

"If you look at engineering programs across the country, most will have a capstone class but the projects are typically created by the mentors or instructors," Christian said. "This is unique. I've never seen it where we're sending our students out into the community."

The projects boost career prospects for students, he said. Future employers tell him they love hiring graduates who have interacted professionally with clients.

For communities like Griffin, having the students do the initial research is a big help.

"It's an excellent resource to have. You get some good engineering input," Jacobs said. "Moving forward, we can have some more concrete ideas. Will this site work? Will it not work? Here's some things we need to think about before we start spending dollars that are dedicated to the project."

Since 2014, Christian and Durham have supervised 38 students in the completion of 13 Archway Partnership projects. For the 2016-2017 academic year, 10 projects from five Archway Partnership communities have been selected by 30 students who will focus solely on their respective project for the next two semesters until graduation in May 2017.