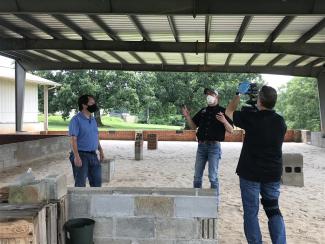 Dr. Dan Suiter, a professor of Entomology at UGA Griffin, speaks to Dr. Nick Fuhrman, better known as “Ranger Nick”, about the Structural Pest Training Facility at the UGA Griffin Campus. Ranger Nick was in town to film a segment on termites with Dr. Suiter for an upcoming portion of the Georgia Farm Monitor television show.

If you’ve ever wondered how to protect your home from termites, tune in to your local Georgia Public Broadcasting station this weekend when two University of Georgia professors will join forces to show viewers the proper steps to help keep their homes pest-free.

University of Georgia entomologist Dan Suiter, a professor on the UGA Griffin campus, and Nick Fuhrman, a professor in the College of Agricultural and Environmental Sciences (CAES) on the Athens campus — better known as “Ranger Nick” to viewers of the monthly Georgia Farm Monitor television show — will appear together on the July episode of the show with tips to stop termites.

Fuhrman, a professor in the CAES Department of Agricultural Leadership, Education and Communication, hosts a monthly segment called “Ranger Nick” for the show, focusing on ways UGA Cooperative Extension reaches local communities and educates viewers on everything from how honey is harvested and how watermelons are grown to identifying the type of snakes you should never kill and touring tiny houses built by UGA students.

After reading one of Suiter’s articles about termites, Fuhrman thought Suiter would make a great guest on the show to inform the public on some essential ways to help prevent termites from working their way into homes. He and Ray D’Alessio, who serves as the senior producer and cameraman for the show, traveled to UGA Griffin in June to meet with Suiter and film a segment for the July show.

“Dr. Suiter and I have worked together before on a few Extension-related committees over the years and I have always appreciated his sincerity and genuinely warm personality,” said Fuhrman. “When I think about guests for our Ranger Nick television segment, I often think about the personalities of my colleagues and who would be fun to hang out with for a segment.  I try to envision my viewers sitting at home, smiling, and getting excited along with me and my guests. I have these sudden bursts of enthusiasm that I can't help that hopefully get them excited too.”

Suiter was thrilled to be part of the program and is excited to show off what programs are available at the Griffin campus.

“Dr. Nick Furhman's Ranger Nick program is a fantastic service he provides for several million viewers of the Farm Monitor. His program provides short, interesting articles that provide viewers of the program some help in their lives,” said Suiter. “Filming some of the basics of termite biology and management to provide content to his large viewership is highly impactful for my Urban Pest Management Extension program and sheds important light on the diversity of programs on the UGA Griffin Campus."

Throughout the two-hour filming, the trio — who wore masks and practiced social distancing as much as possible — showed off the Structural Pest Training Facility located on the Griffin campus. Suiter explained that the facility, one of only a few in the Southeast U.S., gives those who work in the pest control industry the chance to practice the steps they learn in training before performing them on the job. The training facility is set up to simulate the crawlspace under a house, a commercial kitchen, and a hotel room for dealing with termites and other urban pests.

During the show, Suiter explains the preventative measures homeowners can take to keep termites out and shows Ranger Nick the areas of a house or building that are most susceptible to infestation.

To learn all the termite prevention tips for yourself, be sure to check out the July installment of the Georgia Farm Monitor. The new episode will on your local Georgia Public Broadcasting station at 8 a.m. July 18 and 6 a.m. July 19.