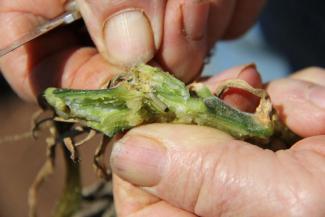 Squash vine borer larvae live inside the plant stem. One method of control is to physically cut open the stem and remove the tiny pest. First, create a slit parallel to the stem veins. Begin the slit at the frass-covered hole at the base of the plant and continue toward the tip of the vine until the borer is found and removed. Once the borer has been removed, cover the slit portion of the stem with soil and water it to encourage rooting.

Backyard squash growers may not agree on which variety is best, but they do agree on one thing – squash vine borers are the enemy.

The small larvae burrow through squash plant stems, wilting and eventually killing what appear to be lush, healthy plants. Since they are hidden inside the plant, most home gardeners have no idea the pests are there until the plants wither and die.

Squash vine borers overwinter in the soil, usually where squash or zucchini plants were planted the previous season. When the adults emerge from the soil, they lay eggs on the base of the stems of susceptible plants.

They love squash, too

The tiny destructive pests love to lay their eggs on summer squash, zucchini, winter squash and pumpkin plants but seldom attack cucumber and melons. After about a week, a pale larvae hatches and eats its way into the plant stems near soil-level. As water flow is cut off, the plant wilts and literally collapses.

There is no tried and true successful method to control the pest, but University of Georgia experts do offer tips for gardeners who choose to put up a fight.

To stay ahead of the pests, plant squash as early as possible so the plants are producing before the 6 to 8 summer weeks vine borers are active.

“I sometimes plant so early that I may at times have to cover seedlings with a bucket if there is a frost warning,” said Lisa Ames, an entomologist with the UGA College of Agricultural and Environmental Sciences.

Ames stopped growing zucchini due in part to vine borers. She turned to an alternative variety called snake gourd or Cucuzza, which is resistant to vine borers and readily available to grow from seed.

UGA Extension consumer vegetable horticulturist Bob Westerfield says he “wouldn’t be surprised to see (resistant) squash varieties soon.” Until then, Westerfield chooses to share his squash crop with the pests.

“I plant a new crop of squash every couple of weeks to stay ahead of the squash vine borers,” he said. “That way we have some and they have some.”

“One of the best management methods for this pest is rotating away from the area where squash plants have been planted in the past. Unfortunately, not all gardeners have the space to completely rotate away from the infested soil,” Tedrow said.

She recommends gardeners use floating row covers to keep flying adults from laying eggs on the vines. The covers must have good contact with the soil to keep the adults from finding the vines and should remain on the plants until female flowers begin to form.

“At this point, remove the covers to ensure pollination occurs. Covered plants have a tremendous head start on borers,” she said.

Gardeners can also get physical and remove the pests from the infected squash plant stems with a knife.

“First, create a slit parallel to the stem veins. Begin the slit at the frass-covered hole at the base of the plant and continue toward the tip of the vine until the borer is found and removed,” she said. “Once the borer has been removed, cover the slit portion of the stem with soil and water it to encourage rooting.”

Insecticides are often not helpful against squash vine borers due to the location of the cream-colored larvae in the stems. Contact insecticides (insecticidal soap, neem and others) cannot reach the larvae, and most systemic insecticides are not safe on vegetable crops.

Other control recommendations during the growing season include using yellow-colored bowls of soapy water to attract and drown the adults. Another option is to use sticky traps, also usually yellow, to attract the insect.

If none of these efforts work and the squash plant wilts and dies, Tedrow says remove the debris from the garden. Borers may still be living in dying vines.

For more on controlling garden pests, call your local UGA Extension office at 1-800-ASK-UGA1 or view on online publication at extension.uga.edu/publications/.