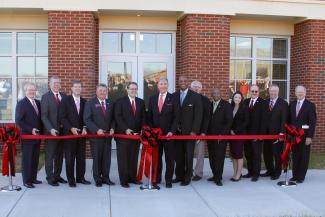 University leadership and state and local officials gathered Monday, Jan. 31, 2017, to officially cut the ribbon signifying the opening of the Food Product Innovation and Commercialization building on the University of Georgia campus in Griffin, Georgia.

University of Georgia scientists are now better equipped to help businesses launch new food products with the opening of the Food Technology Center, locally known as the FoodPIC building, on the UGA Griffin campus. The facility houses the university’s Food Product Innovation and Commercialization, or FoodPIC, Center.

The $7.4 million project was funded through $3.5 million from the state of Georgia and additional funds from the U.S. Economic Development Administration, the Griffin-Spalding Development Authority and the University of Georgia.

“The Food Product Innovation and Commercialization Center is an outstanding example of the University of Georgia using its resources to help strengthen our state’s economy,” Morehead said. “We are grateful for the support we have received for the new Food Technology Center, and we are excited to expand the reach of FoodPIC within the global food industry.”

“This facility is a great addition to the Griffin campus,” said UGA Griffin campus Assistant Provost Lew Hunnicutt. “Housing FoodPIC on our campus allows us to make an impact on economic development, with regard to food and food products, in the Griffin-Spalding County community, across Georgia and potentially around the world.”

While awaiting funding for and construction of the building, faculty in the UGA College of Agricultural and Environmental Sciences used existing laboratories on the UGA Griffin campus to help food entrepreneurs with product development, packaging, food safety, consumer acceptance and marketing.

Kirk Kealey, whose career in food development includes launching products for General Mills, M&M Mars Inc. and PepsiCo Inc., became director of FoodPIC in 2015. The center focuses primarily on Georgia food companies and Georgia commodities such as peaches, peanuts and blueberries, but Kealey would like to see the UGA center become the best facility of its kind in the U.S.

Kealey said FoodPIC has a current project with an ingredient company that hopes to see its reduced-sodium salt used in convenience foods such as potato chips. FoodPIC scientists in Griffin also are working with a company that plans to incorporate its probiotic into extruded foods, “something like Cheetos,” he said.

FoodPIC is designed for short-term partnerships between food entrepreneurs and UGA scientists, not long-term food production and packaging.

“We help companies get a pretty good idea about how big their business potential is. We don’t want to become their partner for life. We want to help them get to the next stage in their journey and then send them on their way,” Kealey said. “They then can go either to their own manufacturing site or to a co-manufacturer who will make their recipe to their specifications.”

After meeting with UGA FoodPIC faculty and learning about the rules and regulations of the food industry, some potential clients decide to stay small and just create recipes in their home kitchen to share with friends and family.

“FoodPIC is where food entrepreneurs go with their ideas, and we turn them into reality—into physical prototypes that they can eat.” Kealy said. “If they decide they want to continue their journey, we can help them with process development, package development, shelf stable studies, thermal process validation and the nutrition facts panel—we’re a one-stop shop.”

The new Food Technology Center in Griffin, and the equipment now housed in it, gives the UGA faculty working there the ability to develop larger batches and more finished products. In the past, the scientists were constrained by the size of the existing small, pilot plant.

“Ideally, what we have now is a place where we can help people scale up their products. If they’ve gone beyond the kitchen and need help to make more product in larger batches, we can now help them much more efficiently than we could last year,” Kealey said.

For more information on the FoodPIC Center, go to caes.uga.edu/center/foodpic/.