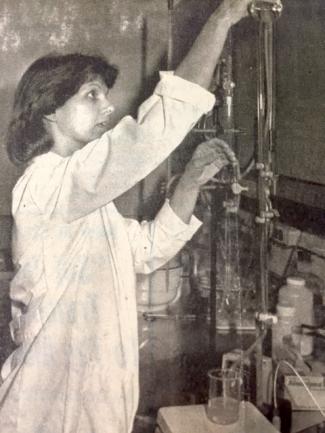 Sue Ellen McCullough is shown working in a lab in the University of Georgia Department of Food Science and Technology on the Griffin Campus circa late 1970s. McCullough recently retired with close to 40 years of service.

In December of 1976, Sue Ellen McCullough took a job at the University of Georgia Griffin campus — then known as the Georgia Experiment Station — on the advice of a neighbor. On March 29 she retired from UGA-Griffin, taking with her a trove of memories and experiences.

“Dr. Wayne Bough was a faculty member and he was also my neighbor,” said McCullough, a native of Griffin. “We talked about me coming to work for him and he told me to ask my husband if I could work with him for about four months.”

The “temp” job turned into a nearly 40-year career with UGA’s Department of Food Science and Technology.

McCullough had worked at the local hospital and for Southern Bell, but she had no idea what to expect working in a laboratory at UGA. Bough was working on a grant project funded by UGA Marine Extension and the Georgia Sea Grant program, so McCullough’s first experiences were a little fishy.

“I was working with shrimp shells,” she remembers. “I had to dry them up in the shop in a big huge oven. When the men who worked in the shop saw me coming, they weren’t happy, because it did not smell good at all.”

When Bough left Griffin to accept a position with UGA Marine Extension in Brunswick, Georgia, McCullough went to work with UGA food scientist Kell Heaton. For the next six years, she helped him on various projects like canning peaches and peppers and working with other commodities, like pecans.

“We used big steam kettles and that was hard to do,” she said. “We had no air conditioning and it was very hot work in that pilot plant.”

In 1988, McCullough took what would become a four-year break from the “station” (UGA-Griffin) to care for her father and plan her daughter’s wedding.

“When (UGA-Griffin food scientist) Dr. Rob Shewfelt learned my Dad was ill, he came to visit several times,” she said. “He said ‘I know it’s not a good time, but I just want to let you know that I’d love to have you back at work.’ I cried a bucket.”

In 1992, McCullough returned to the experiment station to become Shewfelt’s technician in the food science department.

Over the years, she worked for numerous UGA faculty on a plethora of fruit and vegetable storage and quality projects. She was involved with developing, making and serving sensory samples, as well as collecting data from consumers via the UGA Mobile Testing Lab, grocery store tests and on-campus sensory panels.

For the past four years, McCullough worked with UGA food scientist Koushik Adhikari in the UGA-Griffin Sensory Laboratory, recruiting panelists and preparing food samples for consumers to taste and judge.

“It was a delight to have Sue in my sensory lab group,” said Adhikari. “She was a very conscientious worker and all my graduate students loved her because of the way she treated them and took care of them.”

Reflecting on her career, the now grandmother and great-grandmother says that what she misses the most are her first coworkers at UGA-Griffin.

“They were some of the sweetest people. I was 27-, 28-years-old and they were older and they kind of mothered me. I think only one of them is still living,” she said. “I have been blessed over the years to work with some really good people. I feel really good about the work I did.”

McCullough showed that same sense of care to numerous UGA graduate students based on the Griffin campus as she helped them conduct experiments that were required as part of their degree work.

“My greatest joy over the years was helping students and seeing them develop their careers in food science,” she said. “I am a ‘Georgia mom’ to several of them. I enjoyed my time (at UGA-Griffin) and all in all it’s been a great ride. I will always keep Georgia on my mind!”