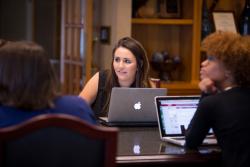 Two years after she received her bachelor's degree from the University of Georgia, Rachael Hart Earls was excited to return to her alma mater to begin her doctoral studies. But as she prepared for life in a laboratory as a neuroscientist, she worried that she would feel isolated and wondered if there was a way to create synergies between her academic goals and her desire to work with people outside of the lab.

She found the answer in Graduate Scholars LEAD (Leadership, Engagement and Development), a program launched this summer by the Graduate School. Funded by a $495,000 Innovations in Graduate Education grant from the National Science Foundation, the
program fosters the development of critical thinking skills, teamwork, communication and leadership.

"I was sold right away," Earls said of the program, which includes an eight-week summer academy facilitated by faculty from the J. W. Fanning Institute for Leadership Development, College of Engineering, Grady College of Journalism and Mass Communication, and College of Veterinary Medicine. It also includes a follow-up grand challenges course, through which students are working this fall to design a meaningful solution for a community in need. 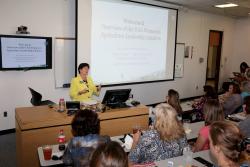 More than 150 women and men convened Wednesday on the University of Georgia campus in Athens, Georgia, and at satellite sites in Griffin and Tifton, Georgia, for the inaugural Women in Agriculture Leadership Initiative Luncheon. Following on the heels of the UGA-led Southern Region Women’s Agricultural Leadership Summit in February, the lunch was the first in a series of events aimed at building a stronger professional network for women working in agriculture.

“I was very excited about the great turnout we had, as well as the great diversity of backgrounds, colleges and interests represented at the inaugural leadership luncheon,” said College of Agricultural and Environmental Sciences (CAES) Associate Dean for Extension Laura Perry Johnson. “I was glad to see that this is a topic that so many people are interested in discussing.”

Women make up 30 percent of the nation’s farmers and almost half of employees in agricultural firms, but they are still underrepresented in terms of farm ownership and on the boards of companies and agricultural advocacy groups.

As part of February’s summit, delegations from 13 Southern states came together to produce a list of recommendations meant to help women embrace leadership roles in agriculture.