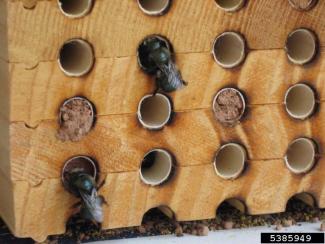 As mason bees nest, they create a series of chambers. Called cells, these compartments contain one egg and are separated off with mud. As a result, mason bees routinely interact with the soil until the nesting is complete. (Photo: Scott Famous, Department of Defense, bugwood.org)

Because mason bees carry loose, dry pollen rather than forming it into a ball like honey bees, they have a much higher pollination rate. They also collect pollen from a variety of sources, where honey bees tend to focus on one area until it is depleted.  According to Fortuin, these tendencies allow one female mason bee to pollinate as much as 120 honey bees in her lifetime.

Mason bees get their name because they do not build a wax-comb hive but instead use mud to build their nests within naturally-existing holes. It cannot drill its own holes like a carpenter bee, but the blue orchard mason bee is perfectly comfortable using holes created by other insects or any other small opening it can find, usually hollow reeds, straw or even small paper tubes. Their adaptability in nesting location allows farmers to create habitats on their farms.

“After a female bee selects a nesting site, the female collects a pollen provision big enough for one egg then uses mud to seal off an egg with the pollen, creating individual partitions or cells for each egg within the nest. The eggs hatch and mature within the cells of the nest and eventually spin a cocoon where it pupates and turns into an adult which emerges in the spring,” said Fortuin.

According to the U.S. Department of Agriculture Forestry Service, these bees have a strong preference for fruit trees and are known for their efficiency when pollinating along with a willingness to pollinate in colder conditions than honey bees.

Despite their importance in orchards, little is known about the impact that soil-drench applications of neonicotinoid insecticides have on blue orchard mason bees.

As reported by the National Pesticide Information Center, neonicotinoid insecticides are made to mimic nicotine. These compounds disrupt and stop the central nervous system from functioning properly. As a water-soluble compound, it can be applied directly to the soil, onto seed or sprayed onto plants.

In the past, says Fortuin, risk assessment studies on the interactions between wild bees and this class of pesticide have focused on direct contact from pollen or foliar applications of the pesticide. Although wild bees regularly interact with the soil, little research has been conducted on the risks of exposure through soil-based contact.