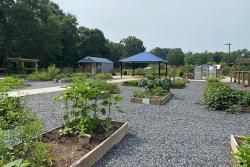 Labeled a food desert by the U.S. Department of Agriculture, the Fairmont community in Griffin, Georgia, has historically had slim options for sourcing fresh, nutritious food nearby. But this desert is becoming an oasis of fresh fruits and vegetables thanks to a group of dedicated agencies and volunteers who have worked hard for nearly 10 years to create a thriving community garden.

The Healthy Life Community Garden — which was established in 2012 — began as a partnership between the city of Griffin, the Fairmont Community, Griffin Housing Authority, the local chapter of the NAACP, Spalding County, the University of Georgia Cooperative Extension office in Spalding County, and UGA’s Center for Urban Agriculture (CUA). Funding for the project comes from a yearly grant from the Griffin Housing Authority and covers the cost of supplies for operating the garden and a garden manager. 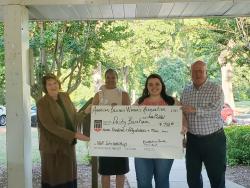 “The ABWA Iris Chapter has a proud history of supporting women as they expand their education and pursue their dreams. We are all honored to support Dusty in her education,” stated Kathleen Smith, President of the ABWA Iris Chapter. “We are proud of all her accomplishments and look forward to seeing her develop her talents further as she builds her life ahead.”

Burnham noted she was incredibly grateful and excited to find out she was selected for the scholarship and for the support of the ABWA.

“I was thrilled to learn of my selection for this honor and I am deeply appreciative of their support,” said Burnham. “This scholarship will allow me to finish my degree on a good financial note and will strengthen my community of peers.” 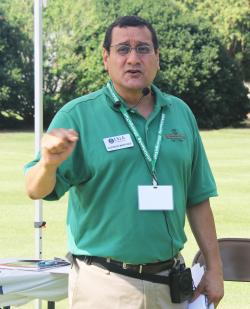 It is said that if you find a job you love, you will never work a day in your life. For Alfredo Martinez-Espinoza, this has come true through his work as a plant pathologist with University of Georgia Cooperative Extension. His passion and hard work have been recognized with the American Phytopathological Society’s (APS) 2021 Excellence in Extension award.

The award recognizes an APS member who has made outstanding contributions by creating, developing or implementing extension-related programs or materials or has provided significant leadership in an area of extension of plant pathology.

“I was ecstatic when I got the call from the APS President,” said Martinez-Espinoza. “I couldn’t believe it. There are so many deserving people who put their soul into their work; I am honored and humbled to be selected.”

David Buntin, interim assistant provost and campus director for the UGA Griffin campus, was delighted to learn of the award presented to Martinez-Espinoza.

“We are extremely proud of Dr. Alfredo Martinez-Espinoza and his work,” said Buntin. “His hard work and dedication to plant pathology extension is well known on the UGA Griffin campus and we are thrilled he is now being recognized by the APS. We congratulate Dr. Martinez-Espinoza and are glad to have someone of his caliber at UGA-Griffin.” 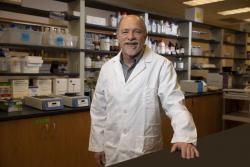 World Food Safety Day is celebrated annually on June 7. Established in 2018 through a U.N. General Assembly resolution, the day seeks to bring awareness to foodborne risks and “to celebrate the myriad benefits of safe food,” according to the U.N.

The Centers for Disease Control and Prevention (CDC) estimates that there are 48 million cases of foodborne illness annually in the U.S. That means that roughly 1 in 6 Americans will contract a foodborne illness this year, and these illnesses are spread through common foods such as produce, meat, fish, dairy and poultry.

Globally, the impact is more significant, with children under the age of 5 and people living in low-income countries hit hardest. The World Health Organization (WHO) estimates that more than 600 million people contract foodborne illnesses annually, and of those, 420,000 will die. Yet the organization fears that the actual numbers are much higher, as there are places in the world where surveillance data for foodborne illnesses are not available.

The CDC says that most of these illnesses are caused by viruses, bacteria and parasites that are transmitted to humans through the food they consume. This is why food safety is a vital component of the entire agricultural production system and is critical to ensuring food security. 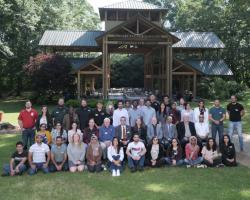 Anyone familiar with agriculture knows that a successful harvest largely relies on environmental factors. An especially hot summer with no rain in sight or poor soil quality can cause as many problems as a late cold snap right in the middle of planting season. Often farmers must rely on trial and error to get the best results. But for agricultural scientists, the guessing game can be reduced thanks to a computer software program called Decision Support System for Agrotechnology Transfer (DSSAT).

Created by a team of researchers from the universities of Georgia, Florida, Hawaii, Guelph and Michigan State University in partnership with the International Fertilizer Development Center, DSSAT is designed to better understand agricultural systems and environmental influences to make predictions that give farmers options for their crops. The current version — version 4.7.5 — can model growth, yield, irrigation, and fertilization requirements for 42 different crops, as well as regional environmental impact. DSSAT has been used by more than 16,500 researchers, educators, consultants, extension agents, growers in more than 174 countries worldwide. 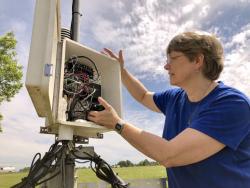 On June 1, 1991, the first agricultural weather station operated by the University of Georgia began transmitting data from Griffin, Georgia. Since then, the UGA Weather Network has grown to include 87 stations scattered across the state, providing weather data to a variety of users. On June 1 this year, this 30-year record of continuous weather data makes the UGA Weather Network one of the oldest state weather networks in the country.

The network, originally known as the Georgia Automated Environmental Monitoring Network, was the brainchild of Gerrit Hoogenboom, an adjunct professor in the Department of Biological and Agricultural Engineering at the UGA College of Engineering. He placed the first four stations at UGA facilities around the state  — in Griffin, Tifton, Midville and Watkinsville — and directed the network until 2010. He was followed by Ian Flitcroft, who retired in 2018. Hoogenboom, now a professor and preeminent scholar at the University of Florida, still uses the UGA weather data as inputs in his ongoing Decision Support System for Agrotechnology Transfer (DSSAT) training classes that are offered each summer on the Griffin campus. 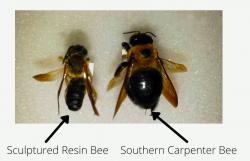 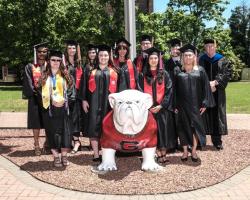 The University of Georgia Griffin campus held a Brick Ceremony for the Spring 2021 undergraduate students on Thursday, May 13 at the Naomi Chapman Woodroof Agricultural Pavilion. This event is special to the Griffin campus, with each graduate receiving a brick, featuring their name and class year, to be placed on the floor of the pavilion where it will remain for all time.

For the undergraduate ceremony, Dericka Pruitt, who received her Bachelor of Arts from UGA’s Franklin College of Arts and Sciences, served as the student speaker. Pruitt was nominated and selected by UGA faculty and staff to be recognized.

She spoke to the crowd about the perseverance she and her fellow classmates demonstrated, noting this was one of the first major steps they would take in the journey of their lives. 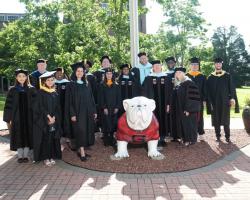 University of Georgia Griffin graduates had the opportunity to literally leave their mark on campus during the Spring 2021 Brick Ceremony held on Thursday, May 13. This event is special to UGA Griffin, with each graduate receiving a brick, featuring their name and class year, to be placed on the floor of the Naomi Chapman Woodroof Agricultural Pavilion where it will remain for all time.

“When you come back 20 or 30 years from now, with the kids and grandkids, you will be able to bring them over and find your brick,” said Dr. David Buntin, Interim Assistant Provost and Campus Director for UGA Griffin. “By then hopefully we will have the entire floor covered in bricks of our graduates.” 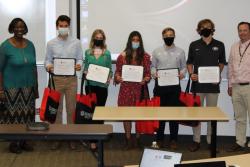