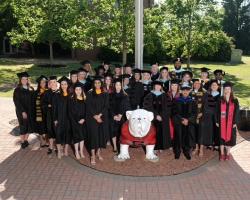 The University of Georgia Griffin campus held its Spring Graduation Celebration and Brick Ceremony for 29 members of the Class of 2022 on May 12, representing all five colleges that offer degrees at UGA Griffin.

Each student graduating from UGA Griffin is honored with a lasting mark on campus, a brick featuring their name and class year is installed in the walkways around the Student Learning Center. In previous years, graduates’ bricks were placed at the Naomi Chapman Woodroof Pavilion.

David Buntin, Interim Assistant Provost and Campus Director for UGA Griffin, told the graduates that the bricks will mark their time at UGA for generations to come, expressing hope that the bricks of future graduates will cover the walkways of the campus in the future. 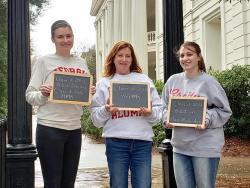 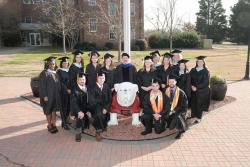 The University of Georgia Griffin Campus held the Fall Graduation Celebration and Brick Ceremony for the class of 2017 on Thursday, December 14, 2017 in the Stuckey Auditorium. In total, 24 students received their degrees and became alumni of the oldest state-supported university in the nation. This was the 22nd graduation ceremony held on the Griffin Campus.

Dr. Mumper challenged the graduates to never become stagnant. Instead to keep challenging themselves, building upon their skills and accomplishments as well as being open to the possibility of change. 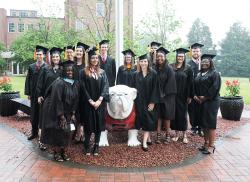 The 2017 Spring Graduation Celebration & Brick Ceremony were held at the UGA Griffin Campus on Thursday, May 4 at 10 a.m. A total of twenty-five graduates from the five colleges on campus did not allow the rain to dampen their celebration of their accomplishments. 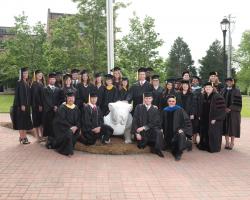 The University of Georgia Griffin Campus Spring 2016 Graduation Celebration and Brick Ceremony was held Thursday, May 12 at 10:00am in the Stuckey Auditorium and Naomi Woodroof Pavilion. Owner of WKEU Radio and long-time supporter of UGA Griffin, Bill Taylor, was the graduation speaker. Christopher Reynolds, CAES Agribusiness major, was the student speaker.

The UGA Griffin Campus celebrated several firsts with having the largest number of students participate in the celebration and wear academic regalia. The new tradition of students “taking a picture with Uga” at his new home in the center of the campus Quad has begun. Approximately three hundred students, faculty, staff, family and friends of the UGA Griffin Campus attended the celebration. Special thanks to Blackshear Photography of Griffin, GA for providing photography for this event. View the full album here.