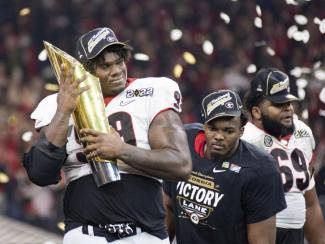 The wait is over

For the first time in over 40 years, the Georgia Bulldogs are atop college football after defeating Alabama 33-18 in the National Championship. The win breaks the Crimson Tide’s seven-game winning streak against the Bulldogs, and ends a national title drought decades in the making.

Georgia has come close to winning it all before, but came up just short to Alabama. Whether it was second-and-26 in the 2018 National Championship, or four yards short in the 2012 SEC Championship game.

Now, all those moments of coming up so short are over, they don’t matter. Georgia finally broke through to win the big one. Behind the arm of a walk-on quarterback, and one of the best defenses in college football, the Bulldogs are national champions.

The 2021 team now joins an elite class of Georgia teams as one of three teams to win a national championship. Now, the teams of 1942 and 1980 are joined by the newest national champions led by head coach Kirby Smart, who after playing at Georgia from 1995-1998, won a national title with his alma mater.