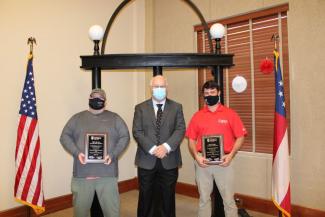 Richie Braman, left, and Ryan Hodgson, right, were named the 2021 Classified Employees of the Year on Wednesday, April 7. They are pictured with Dr. David Buntin, Interim Assistant Provost and Campus Director for UGA Griffin.

The University of Georgia Griffin campus recently named Richie Braman and Ryan Hodgson as the 2021 Classified Employees of the year. The designation was made at the 32nd Annual Employee Recognition Ceremony held on Wednesday, April 7.

The award is presented to classified personnel who have made the most significant impact on the programs at the UGA Griffin Campus. This is reflected through their superior job knowledge and performance, work attitude, initiative, dependability, and time management. In order to become a nominee, each individual is selected by his or her unit and must have been a full-time employee on campus for three consecutive years. After all nominations are submitted, the award recipients are determined by a committee of their peers.

During the ceremony, Dr. David Buntin, Interim Assistant Provost and Campus Director for UGA Griffin, congratulated all the honorees on their nominations.

Richie Braman has been with the Center for Urban Agriculture since 2007 and currently serves as a Developer and Systems Administrator. Through his job he creates technical, online and program solutions while providing support and creative leadership in pursuit of Extension and Research projects. Richie has been instrumental in helping make the Center’s web-based programs reach nearly 5,000 employees of Georgia businesses and provided over 11,000 hours of continuing education.

Dr. Ellen Bauske of the Center for Urban Agriculture, praised Richie for his leadership and his willingness to help others. “He has gently and persistently brought us all along with him, explaining, demonstrating, and always instructing,” said Bauske. “There is an endless line of people at his door, but he always seems to make the time for another project, and he never turns people away.”

Ryan Hodgson has been with Field Research Services for 16 years and currently serves as the units’ Senior Agricultural Specialist. In his position, Ryan works alongside and manages the grounds crew, designs and installs landscapes, hardscapes, and irrigation systems, as well as maintaining irrigation pumps and well stations throughout campus. The stamp for his work is all over UGA Griffin as he has designed the landscaping for many buildings such as the Dundee Café, FoodPIC and the Turfgrass Research and Education Center. He also created the current design of the big “G” on campus.

Ryan is described as someone who is always willing to go the extra mile, and over the years he has worked behind the scenes on many campus events and served as a Campus Ambassador. Dr. James Buck, Interim Director of Field Research Services, praised Ryan for his work in the department, “Ryan has become a trusted face of FRS and his on-campus growth, leadership and goodwill have contributed greatly to the success of FRS and the entire Griffin campus.”

Also recognized during the ceremony were the Meritorious Service Award recipients. Awards were presented to faculty and staff who have served the campus for 10, 15, 20, 25, 30 and 35 years.

The following people were recognized for their years of service.