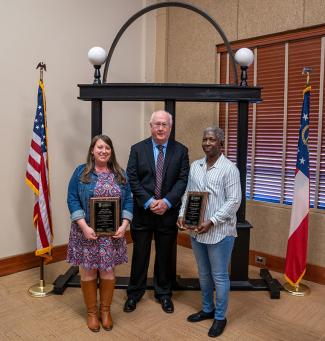 The University of Georgia Griffin campus recently named Ashley Biles and Clary “Ree” Rosser as the 2022 Classified Employees of the Year. The designation was made at the 33rd Annual Employee Recognition Ceremony held on Thursday, March 17 at UGA Griffin.

David Buntin, Interim Assistant Provost and Campus Director for UGA Griffin, opened the ceremony by congratulating all the honorees on their nominations. He stressed how important the staff is to UGA Griffin, noting much of the success of the campus comes from their hard work. He also added how glad he is there is an event to recognize the efforts put forth by such a dedicated group of people.

“I think this is one of the most important events we do all year to recognize the classified staff for all of the great things that they do,” said Buntin.

The award is presented to classified personnel who have made the most significant impact on the programs at the UGA Griffin Campus. This is reflected through their superior job knowledge and performance, work attitude, initiative, dependability, and time management. In order to become a nominee, each individual is selected by his or her unit and must have been a full-time employee on campus for three consecutive years. After all nominations are submitted, the award recipients are determined by a committee of their peers.

Ashley Biles has been an Administrative Associate II in the Office of the Assistant Provost and Campus Director for over four years and is the frontline for campus visitors. In addition to assisting with administrative tasks such as mass mailings, designing special publications, greeting and hosting campus visitors and conducting campus tours, Biles also provides oversight and planning to over a dozen annual campus events. She attends to all details and takes the event from inception to completion without missing a beat. Her position also includes serving as a coordinator for the Young Scholars Program and handling communications for the campus through news articles and social media.

Biles is described as someone who wears multiple hats to ensure that the Campus Director’s Office runs smoothly. She is always eager and willing to help wherever needed while never failing to be friendly, genuine, and professional. Beth Horne, Eventers Coordinator for the Center for Urban Agriculture stated “Ashley projects a warm, enthusiastic attitude to her co-workers, retirees, vendors, guests, and others. I have seen her resolve conflicts and handle other difficult situations with remarkable patience. Ashley is an asset to the UGA Griffin Campus and is a trustworthy, dependable, and hard-working employee.”

Ree Rosser is UGA Griffin’s Custodial Supervisor, a position she has held for the past six years. Her job includes assigning work schedules, determining departmental needs, inspecting buildings for cleanliness, and preparing work performance reports. However, that is just the tip of the iceberg with Rosser, as she is a hands-on supervisor. She does not simply communicate daily tasks and instructions to her staff and then sit back, instead she works side-by-side with them and fills in wherever needed. In addition to her supervisor duties, Rosser also is in charge of sorting, delivering, picking up and assigning postage to the campus mail on a daily basis.

She is described as someone who sets the bar high, leads by example and is always willing to help. Her leadership skills and work ethic not only encourage her co-workers to work with a quality of excellence, but she also spreads this attitude to every part of campus. Her positive and can-do spirit make all the difference in day-to-day work. Sarah Moon, Biological Science Tech for USDA, stated “Ree has always shown the highest level of professionalism and attention to detail in her work. She has great personal integrity and shows respect and care for her coworkers.”

In addition to the awards, the ceremony featured a Program Highlight, which showcases a different area of research or extension on campus each year. This year the horticulture department was featured. Sarah Sawyer, a Program Specialist II in horticulture, spoke about the Georgia Master Gardner Extension Volunteer Program. She informed the audience on what the program does and how they can become involved.

Ashley Frasca, of WSB Radio, served as this year’s keynote speaker. She is a graduate of UGA’s Grady School of Journalism and currently hosts “Green and Growing with Ashley Frasca” on Saturday mornings on WSB radio. She spoke on the importance of being a team player and recognizing that no one gets to where they are without the support of others.

Also recognized during the ceremony were the Meritorious Service Award recipients. Awards were presented to faculty and staff who have served the campus for 10, 15, 20, 25, 30 and 35 years.

The following people were recognized for their years of service.