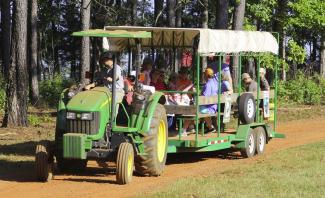 Two tractors operated throughout the day to ferry attendees among the 30 different demonstration sites.

The event, which began in 1987 and is currently held every three years, is an opportunity for property owners and students to learn from and ask questions of experts in a variety of topics related to forestry and wildlife.

"I had a real good committee I worked with that helped make it happen," Granade said.

Attendees had the opportunity to visit 30 different demonstration sites where they learned about topics ranging from attracting desirable animals to their property, dealing with nuisance animals, raising timber and many more.

Granade said the topics are selected based on feedback from previous year's events and current areas of interest such as coyotes in Georgia, and that some repeat favorites were Beekeeping; The Whys, Whens and Hows of Thinning; and Turkey Management.

Charlie Killmaster of the Georgia Department of Natural Resources, gave a presentation titled Wild Game Preparation and Cooking. He said his family eats game almost exclusively and that he learned ways to prep game meat during college when his roommate was a trained chef.

At the Backyard Wildlife: Bats station, Jason Scott discussed ways to attract bats to an area. Samples of bat houses were on display and participants were offered plans to build their own bat houses.

Pond Management was a popular topic which discussed planning and construction of ponds, raising sportsfish and pond fertilization.

Another popular topic was Coyotes and Deer which discussed the history of coyotes in Georgia, reducing the number of coyotes and their impact on the white-tailed deer population.

Writing a Forest and Wildlife Management Plan, Forestry Best Management Practices, Marketing and Selling Timber and Longleaf Pine Economics presentations were aimed at landowners wishing to improve land management or use their land for tree production.

About 340 people attended the event which Granade said is slightly lower than in previous years.

The event was sponsored by The University of Georgia, Georgia Forestry Commission, Georgia Department of Natural Resources, U.S. Department of Agriculture and Abraham Baldwin Agricultural College.