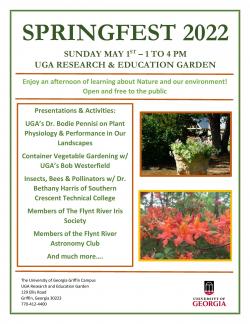 Spring is in the air, which means it is time for Springfest in the UGA Research and Education Garden. The free event returns this year on Sunday, May 1 from 1 p.m. – 4 p.m. after a two-year hiatus due to the pandemic. It is open to the public and everyone is invited to come enjoy the afternoon learning about nature.

For the event, several UGA Griffin departments and local clubs will be offering information as well as hands-on activities. The Flint River Gourders will be creating colorful, dipped gourds for attendees to take home at their booth, while the Flint River Astronomy Club will have a scale solar system for viewing and offering tips on using a telescope to view the stars and planets. 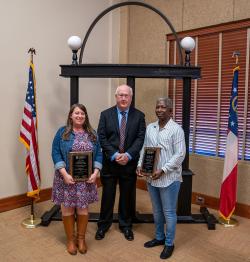 The University of Georgia Griffin campus recently named Ashley Biles and Clary “Ree” Rosser as the 2022 Classified Employees of the Year. The designation was made at the 33rd Annual Employee Recognition Ceremony held on Thursday, March 17 at UGA Griffin.

David Buntin, Interim Assistant Provost and Campus Director for UGA Griffin, opened the ceremony by congratulating all the honorees on their nominations. He stressed how important the staff is to UGA Griffin, noting much of the success of the campus comes from their hard work. He also added how glad he is there is an event to recognize the efforts put forth by such a dedicated group of people.

“I think this is one of the most important events we do all year to recognize the classified staff for all of the great things that they do,” said Buntin. 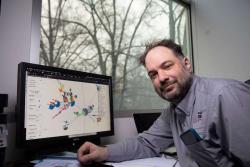 Researchers from the University of Georgia’s Center for Food Safety have developed software that functions as an important step in improving the accuracy of DNA sequence analysis when testing for microbial contamination.

Sepia is a cutting-edge read classifier, written by College of Agricultural and Environmental Sciences Assistant Professor Henk den Bakker, that is out now as open-source software. And it should make genome sequencing much faster for researchers studying bacteria.

The length of chromosomes of bacteria typically range between 1.5 million base pairs to roughly 9.5 million base pairs, but if researchers want to “read” the individual bases of a genome (the genome sequencing process), they can only do that in pieces of 150 to 10,000 base pairs using modern technology. These pieces are called “reads.” 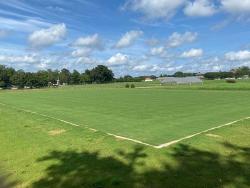 Any time you walk through a park, play a recreation-league soccer game or enjoy an afternoon on the golf course, you are using the products of the multibillion-dollar turfgrass industry. In Georgia alone, turfgrass covers 1.8 million acres, making it one of the largest agricultural commodities in the state, employing more than 100,000 people with a maintenance value of $1.56 billion.

Despite its economic importance, turfgrass researchers often face a lack of research infrastructure and facilities to conduct Extension and educational activities. That is no longer the case at the University of Georgia Griffin campus, where industry-funded partnerships have led to the installation of a research golf green and a research and Extension soccer field. 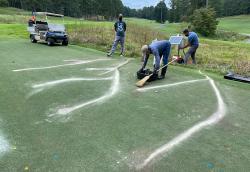 While the old song “Tiny Bubbles” lauds the happy effervescence of a glass of sparkling wine, new University of Georgia research on nanobubbles seeks to discover whether the tiniest of bubbles can hold beneficial properties for turfgrass.

Led by soil microbiologist Mussie Habteselassie, the Georgia Department of Agriculture-sponsored study will evaluate the potential applications of nanobubble technology to control pathogens and improve plant growth, water use efficiency and soil biological health in turfgrass systems. Other researchers on the project include turfgrass and forage pathologist Bochra Bahri and crop and soil scientist David Jespersen, all with the College of Agricultural and Environmental Sciences.

Using technology that generates oxygenated nanobubbles — which are roughly 2500 times smaller than a grain of salt — researchers will apply nano-charged water to turfgrass root systems through irrigation. 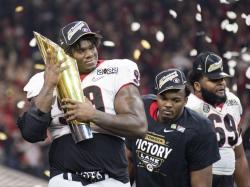 The wait is over

For the first time in over 40 years, the Georgia Bulldogs are atop college football after defeating Alabama 33-18 in the National Championship. The win breaks the Crimson Tide’s seven-game winning streak against the Bulldogs, and ends a national title drought decades in the making.

Georgia has come close to winning it all before, but came up just short to Alabama. Whether it was second-and-26 in the 2018 National Championship, or four yards short in the 2012 SEC Championship game.

Now, all those moments of coming up so short are over, they don’t matter. Georgia finally broke through to win the big one. Behind the arm of a walk-on quarterback, and one of the best defenses in college football, the Bulldogs are national champions.

The 2021 team now joins an elite class of Georgia teams as one of three teams to win a national championship. Now, the teams of 1942 and 1980 are joined by the newest national champions led by head coach Kirby Smart, who after playing at Georgia from 1995-1998, won a national title with his alma mater.

UGA faculty elected Fellows of the National Academy of Inventors 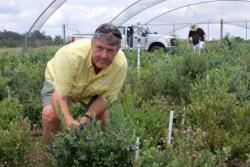 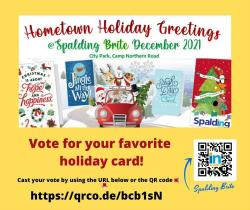 Members of the UGA Griffin Ambassadors and the UGA Griffin Marketing Team created and submitted “life-size” holiday cards for the hometown holiday greeting portion of Spalding County’s “Lite the Nite” 2021 Holiday festival held at Griffin’s City Park. The festival features cards, created by local businesses and organizations, throughout the park along with a drive-through holiday light display.

The groups created two UGA-themed holiday cards on a 4’x8’ plywood backdrop, with the ambassadors’ card highlighting areas of specialty research conducted at the UGA Griffin Campus and the marketing team’s card featuring everyone’s favorite bulldog, Uga. A contest for the best card will be held now through December 20 and the community can vote for their favorite card.  Click this link to vote for your favorite card.

The lights and cards will be on display at the City Park throughout the month of December.

Over 90 vaccinations given at UGA Griffin clinic 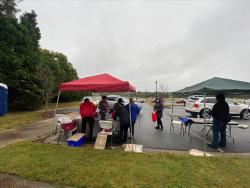 Great success was had at the first COVID-19 and Flu vaccine clinic held at the University of Georgia Griffin Campus with a total of 91 vaccinations administered on Thursday, October 28. The drive-thru clinic was held as a partnership between UGA Griffin, UGA Extension, UGA College of Pharmacy and the local U-Save-It Pharmacy to serve the Griffin-Spalding community.

Those taking part had the opportunity to receive the COVID-19 Pfizer vaccine – first, second or booster dose- as well as the flu vaccine, and a chance to win two tickets to the November 20 UGA football game against Charleston Southern. Tim Keohone was the lucky winner of the tickets provided by UGA Extension. 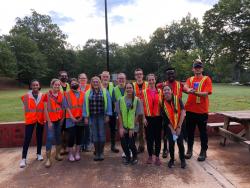